When I first arrived in Nebraska, back in June, vacation planning for the second week of July started out a bit rough. We laughed until tears fell, as we joked about the expectations of our Colorado adventure. Three sisters and their big brother trying to plan a childhood throwback tour, but failing miserably every time we tried to cross off an item from our to do list.

One would think that by our age we could act like adults. Weigh the pros and cons of each idea and simply devise a plan. However, during early discussions, it occurred to me that we easily revert back to acting like adolescent siblings.

Middle backs up Baby most of the time, because she’s used to it. When paired off for summer visits with distant family she was with Baby a lot of the time, so they have a bond that was created years ago and we wouldn’t think of with it. Honestly, we all back up Baby, for obvious reasons. She’s the youngest and everyone’s favorite, so she usually gets her way. (She may or may not be the favorite, but none of us are willing to fess up or challenge her willingly.)

Me, Oldest, backs up Big Brother, because we share an oldest responsibility and have a feisty redheadedness that seems to work better in pairs. He shoots his thoughts straight from the hip, most cowboys do, and I wrangle him fairly well when the others think he’s being too stubborn. (Y’all know how redheads can be, right? Smile and wave…)

Baby backs up Middle, mostly because Middle is a control freak, which we all respect her for, but Baby can tolerate with more patience than anyone else. (We all may be control freaks, but Middle has been dubbed with the tag, so we go with it, okay?) Middle gets the job done with or without a pleasent smile. She’s the one we send in to battle. We even point our fingers as we stand behind her.

This must leave you wondering who backs up the Oldest Sister. Probably leaves you doing some math in your head, too. Well stop, it won’t work out mathematically, we’ve all tried. Fine. Okay, the answer is Big Brother. Mostly, because we’re similar in a lot ways, but also because we were often paired up when shipped to the grandparent’s for a visit. One learns to lean on the consistency of normal.

Truthfully, the four of us back each other up all day long. We call each other out on our ridiculousness and awesomeness, as well.

I’m really more of a prop during discussions, and have the role of keeping everyone happy or laughing, so the upside to this is that all three want to try and please me. (Not really, but it feels really good to write that down.)

You know, moving away from home and only seeing them twice a year has its advantages. I’m funnier than normal, much more rational and go down in history as an amazing people pleaser. (Yes, I could be exaggerating, but I’m writing this, so I get to be whomever I want.)

Sadly, after two and a half days we still didn’t have our Colorado Throwback Tour completely planned, but we were having fun trying. Here’s how one moment went as we were deciding on where we’d stay while on vacation. I feel the need to share this, as it was hysterical at the time. Enjoy!

I should set this story up for you, a bit. We had spent the better part of a day researching online and calling places looking for the regulars, you know, availability, accommodations and location. We were striking out more than not, and it was beginning to seem entirely too funny.

At one point we called a lodge near Nederland, CO, which had enough rooms to accommodate our group. Middle was doing the talking, I was lying on the couch with Baby on my speaker phone and Big Brother was quietly sitting.

I could tell that the conversation between Middle and the person on the phone wasn’t going as we’d hoped. It was the tone in her voice, the random stare at her fingernails, and the complete boredom coming from her eyes. I knew we were in trouble when Middle’s nose curled up.

“Oh really?” She said. “Well, I guess we could do that, Sir. I’m pretty sure I’ll have to talk that over with the group first, however. ”

Her attitude had caught my attention a little bit before that and I whispered to Baby, “This isn’t the resort either…”

Middle kept talking and the conversation between the two of them continued to sound less than favorable. That’s when I cracked emotionally. Being the nut that I am, I lost it and began giggling. Planning a trip had gotten into my head and out of exhaustion I retaliated.

“Tell him we refuse to feed the homeless man that’s living under the porch,” I snickered quietly.

“Geez, just hang up,” I encouraged.

Middle, who was trying to keep her composure, smothered a giggle and I saw her do it. Folks? This is where the laughter blew up around us.

Middle began snapping her fingers, pointing at me and mouthing, “Stop it!”, over and over again, which has proven in moments past only to make things worse. She tries to be so intimidating and sometimes it works on us.

I make eye contact with Middle for the first time, since I started laughing, and she’s grinning, but still trying to hold down a conversation. This wasn’t the place for our family. She was just prolonging the inevitable, while quietly giggling. More like stifling a laugh, which then opens up the flood gates as I roar with laughter. Baby following suit. Big Brother is snickering and laughing, as he does, by stopping his natural breathing and becoming red in the face, as he falls over on to the floor.

Middle, in a fit of mumbled laughter says, “I’m sorry. I’ll have to call you back.” She hangs up the phone and exclaims, “That’s it! I’m done! Someone else is calling from now on!”

The four of us continue laughing into the night. Yes, another unsuccessful day of planning for us was achieved.

Afterwards, I silently sat there daydreaming about this homeless man I’d creatively dreamt up. My story was that we would have been asked if we were willing to feed the homeless man living nearby, twice a day. Maybe he happened to be writing the next best american survival novel under random porches, one of which could have been ours, if he liked us. Only half of our group would’ve been on board with this idea, I think. I can’t imagine why.

He seems mysterious already and not one of us could have denied that the humorous jokes would’ve gone on for days. Keeping everyone upbeat and happy throught our vacation. The upside also being we could be part of history, if he would have become famous. Plus, he would have probably been well understood and accepted at the resort or been hauled off before we arrived. Wouldn’t you think?

Personally, I found my daydreaming extremely inspirational and began writing questions in order to have interviewed him properly. I’d have called him Hank, I think.

Bummer we didn’t go for a stay with Hank, don’t you think?

We leave in just a few short hours in this 12 passenger van we’ve nicknamed White Lightening.

We’ve had our t-shirts made for the 2014 Colorado Throwback Tour. Don’t forget the matching survival bracelets we made with love. Cool, right? This was Mom’s idea. She the often quiet and steady voice of reason. 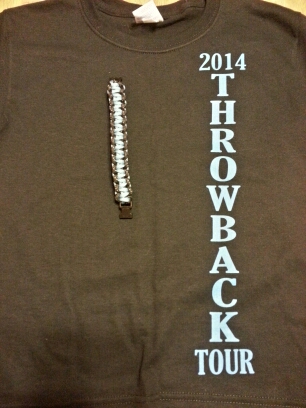 The back of our t-shirts took a little thought and we decided to go with what made sense. After all the preparation, in order for us to travel back to Colorado, we thought it was only appropriate to express our desire properly.

One of our main goals was to have our family hike to the Meadow. A mountain destination that our family has been hiking to for generations. The spot our grandparents had taken us every year for as far back as I can remember. We’d stay in this cabin and hike nearly every day of our vacation. The four of us kids love this place.

Family Cabin Of Years Past

The trail, not far from the family cabin, holds hundreds of memories and in every way has bonded us for life. The Meadow is beautiful and I plan on sharing photos of her soon. We found it fitting that we put this on the back of our shirts. 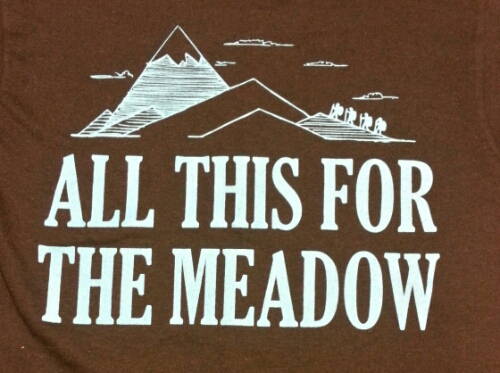 All This For The Meadow

“Fate never promises to tell you everything up front. You aren't always shown the path in life you're supposed to take. But if there was one thing she'd learned in the past few weeks, it was that sometimes, when you're really lucky, you meet someone with a map.” ― Sarah Addison Allen
%d bloggers like this: