might I come for awhile,
little bitty dreams
of yesterday
have returned.
crisp air has forged
a wool blanket, yet
within you I’d feel protected.
air has freedom I’m unsure
of, terrifying ideas
too many possibles,
too many versions of me
compete.
your walls,
could bring me peace,
looking up …
the distance makes
me dizzy.

Tuttle Creek, spring semester
Convinced and finally alone,
The promise of happily ever after
With the help of a seductive cove.

Clothes drapped over fringe
Growth no higher than our knees
As summer promised a convenient hinge
And tree buds blossomed into leaves.

Warm air cradled doubt
While we dipped and slid with haste
A runner’s legs supported me
Mine, wrapped around his waist. 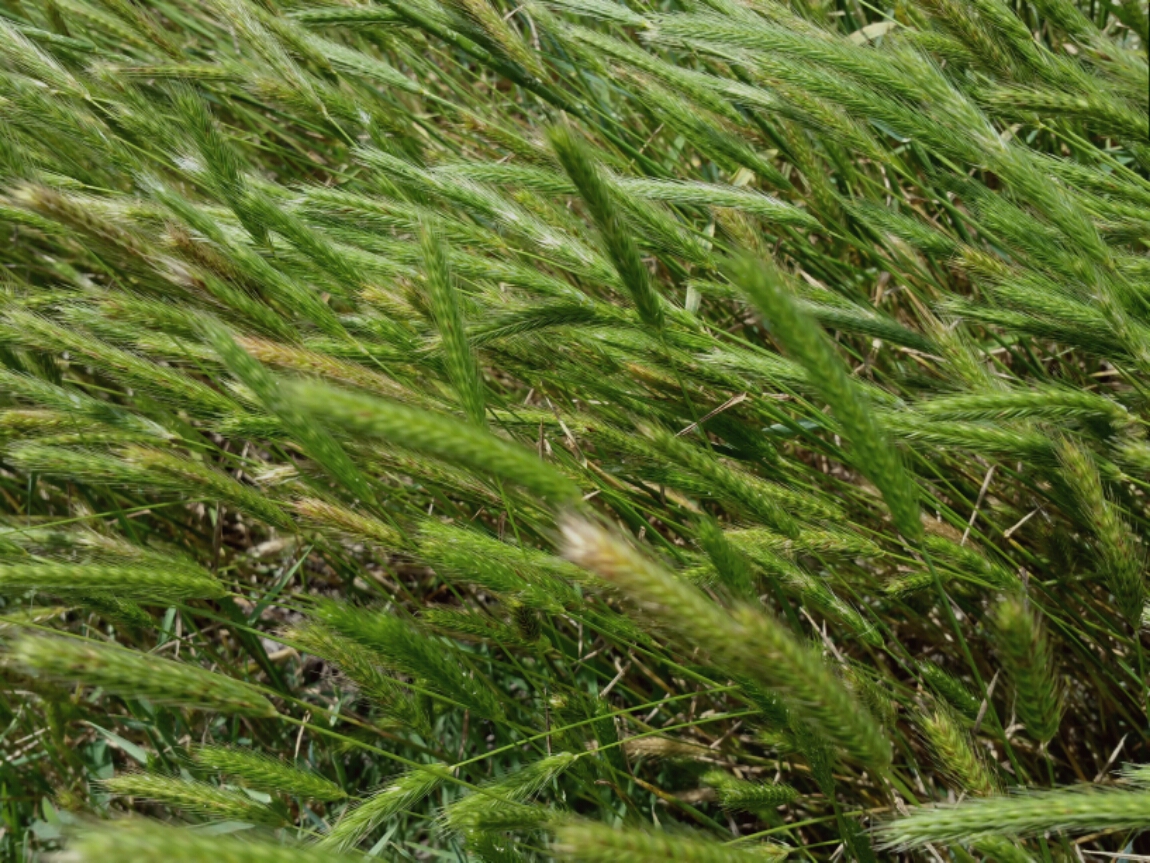 A magical splendor happens here
Among the winds of wild
Emotions felt, across my skin
As I remember his smile
And how it fits, perfect
Upon my heart
Strong, brave and controlled
Paying no mind to the breeze
Or how hard it blows 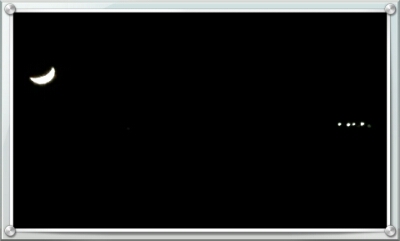 Wishing I was with you,
No matter where you are,
I thought I heard you whisper,
Meet me among the stars.
Paper, rock, scissors,
Our little boy insists,
Hugs and kisses,
On his nightly visit.
He waits patiently,
On the tip of the moon,
His favorite moment,
You be me,
And I’ll be you.

***Written with love for my siblings. Big Brother, Middle, and Baby will all arrive late tonight at Dad’s house. The Old Cowboy will be thrilled. I know the coffee will be on and the anxious chatter will begin. It’ll be way past midnight, it usually is, when this poem arrives.
*****
~Photo taken by Middle somewhere in Western Kansas~

‘Tis a late Thanksgiving Eve,
And found crowded around the table,
Is a family who loves to giggle,
With someone who’s trying to sleep.
As usual, it’s our Middle,
Big Brother’s asked to please wake her,
Hurry now, before she’s seen,
Or, as usual, Baby’s gonna scream.
“Someone pay attention to me!”
“Don’t you love me anymore?”
“Get Middle off the floor!”
Big Brother will scratch his head,
And roll his eyes with a grin,
Mumbling, “Not this again…”
Time for some of my Dad’s whiskey.
Our Old Cowboy lifting her to her feet,
Left responding rather gruffly,
“Middle, you haven’t even kissed me!”
All four will be left to ponder,
Why his Oldest Daughter’s missing,
“Who does she think she is by moving.”
What could their redheaded sister,
Have possibly planned,
More important than her clan?
I know, they know, for Thanksgiving,
There’s nowhere else I’d rather be,
But, this year I have to write for them,
From here in Houston, sun shining.

Happy Thanksgiving!!!! I love you guys!!

~Little do they know…I’m off in the morning to experience Houston’s live Thanksgiving Day Parade.

At peace over what will be
but please fight
Do it!
Willingly
Oh, Hero of mine
First man I ever loved
You’ve got to try
You’d be the first to tell me why
Nothing’s easy in this life
Not even chemotherapy, it seems
You once told me some things aren’t worth the fight
This is not one of them, not this night
Cancer isn’t going to rein
Not this family, never again 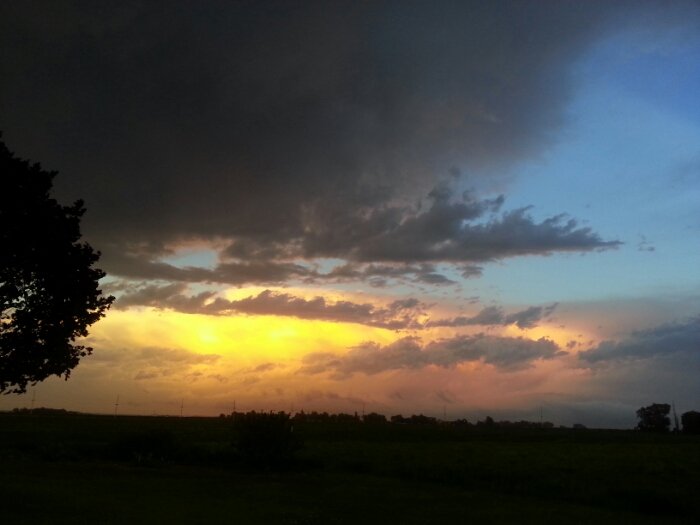 Trying to sparkle
Amongst confusion
How’d she end up here
Once again, questioning
Field Daisy born of trouble
Rocks breathing life into her
Thrives beyond comprehension
Disbelieving in her random beauty
Appearing timeless, and perfect here

Golden Kansas wheat sways
Beneath this huge agitated sky
Your clouds arriving swiftly to me
Now, one of life’s cherished mysteries

Saying good-bye to this amazing view of my Big Brother’s backyard today. We’ve packed our bags and we’re Kansas bound for the weekend. The lake is calling our name and so is our Dad. I cannot wait to hug him close and spend some quality time in his boat.

I hope to catch at least one fish this evening. I’d love to write a poem about a fish, but I’d settle for a longing poem about the one that got away. Ha!

Big Brother and I have all we need in order to have some fun in the sun. His black Silverado and my white Charger will be rockin’ some country music favorites along the way. Any suggestions? Adventure awaits, my friends. I’m super excited to take a trip with my brother and the children. We can’t possibly mess this up. Have a blessed and relaxing weekend!!

Did you know that driving from the south end of Texas to the northern part of Texas can be a full days travel? It can and that was Friday’s adventure, we’re moving on.

After waking up in northern Texas, to icy conditions in all of Oklahoma on Saturday, we decided to hang a left and travel across the state. We did this thinking we could possibly drive around the weather. Yea, great idea, save it. I wanted to keep moving so we could still make it to Nebraska by Saturday night.

It’s amazing how truly large Texas is – it goes on for miles. Miles people, I mean miles. Are you with me here?

The plan was to travel east to Amarillo, TX and then head north. That was the plan. Well, Amarillo was getting snow by Saturday afternoon and we were headed right for it. We opted to turn blindly (Well kinda, I had my GPS.) north at that point since we’d only experienced rain. Actually a light rain really, and more of a mist if anything.

A decision to make a be-line for the Oklahoma / Kansas boarder just north of us sounded like a better plan. It seemed that we had gone west far enough to miss, or out run, the ice.

We had. Well until we hit 5pm on the day of Winter Solstice. (I have lots of pictures to share.)

By then we had driven into snowy conditions with no plow truck in sight, apparently. To me, it appeared that the Oklahoma snow removal budget didn’t allow for much wiggle room, so a shockingly quick snow storm would just have to wait for the sun. The State had called it a day, I guess, or twas the weekend and someone was having a Christmas party.

The roads were a mess. Nothing like driving on a snow covered ice cube to get you reacclamated to driving up North. Nebraska is north when you’re coming from south Texas. Just so we’re clear all you naysayers.

By the time we had driven over Black Kettle National Grassland’s long bridge–nerves were shot. Time to find a hotel, yeah, good luck with that, Aud.

After another 40 minutes or so we came upon Home-Sweet-Home…or the Holiday Hotel…is this some sort of sick twisted joke?

Yes, I know, but the heat worked and it meant we were off the roads. Bring it on!

How did they know to have my favorite bird on the wall? Go Cardinals!! #STL

Once inside the room and everything was unpacked from the truck we realized that food was of a necessity, or it was going to be a long night. Not far from the hotel was a restaurant, which felt compelled to confuse me: 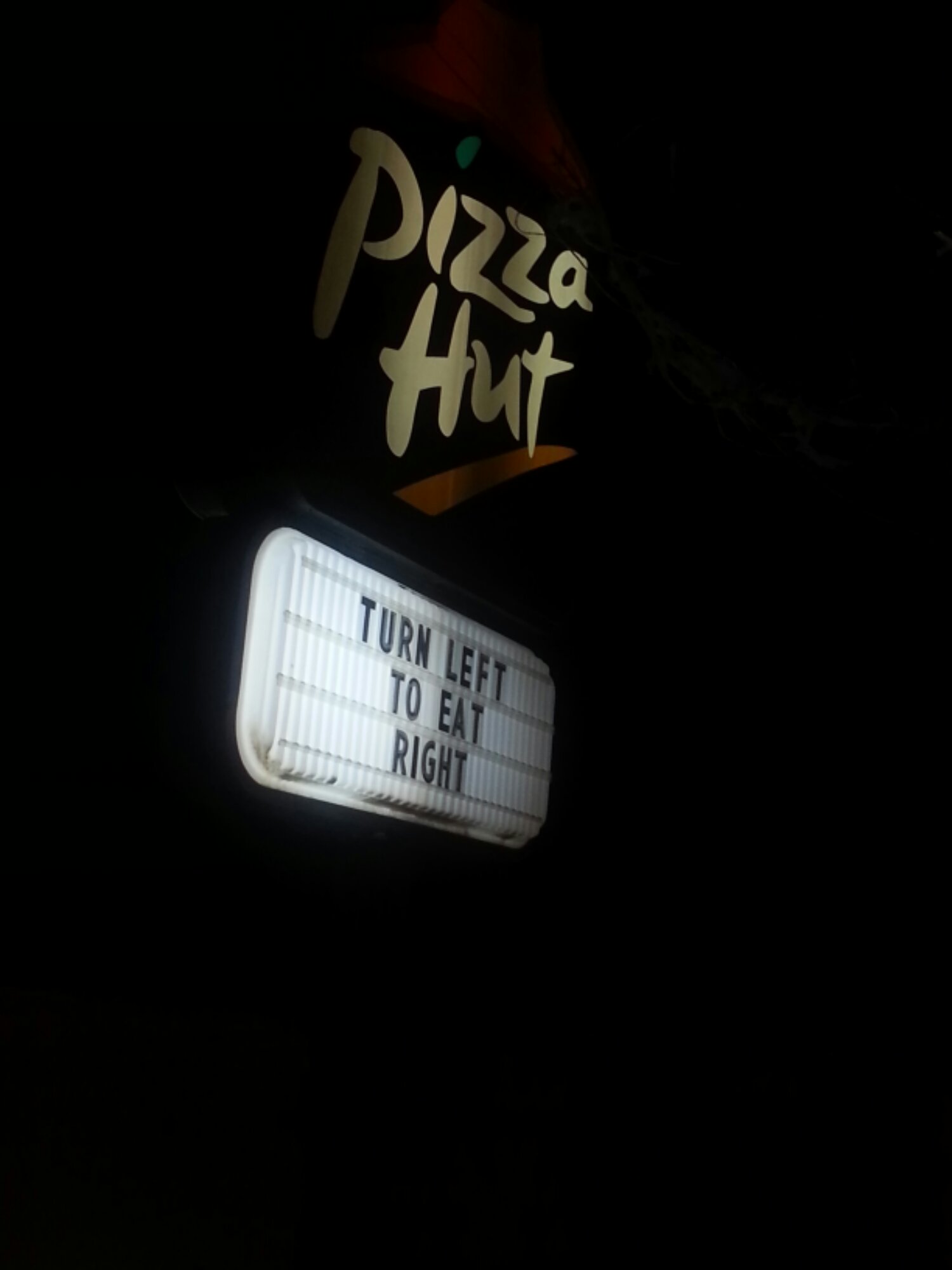 After we’d eaten, and I showed off my totally rad farm girl driving abilities so we could make it up the hills and back to our hotel, we settled down for some rest.

One thing is for sure, I didn’t sleep as sound as little Kendra seemed to be here. Her mommy made sure she had the best of everything, as she roughed it somewhere in Oklahoma last night. 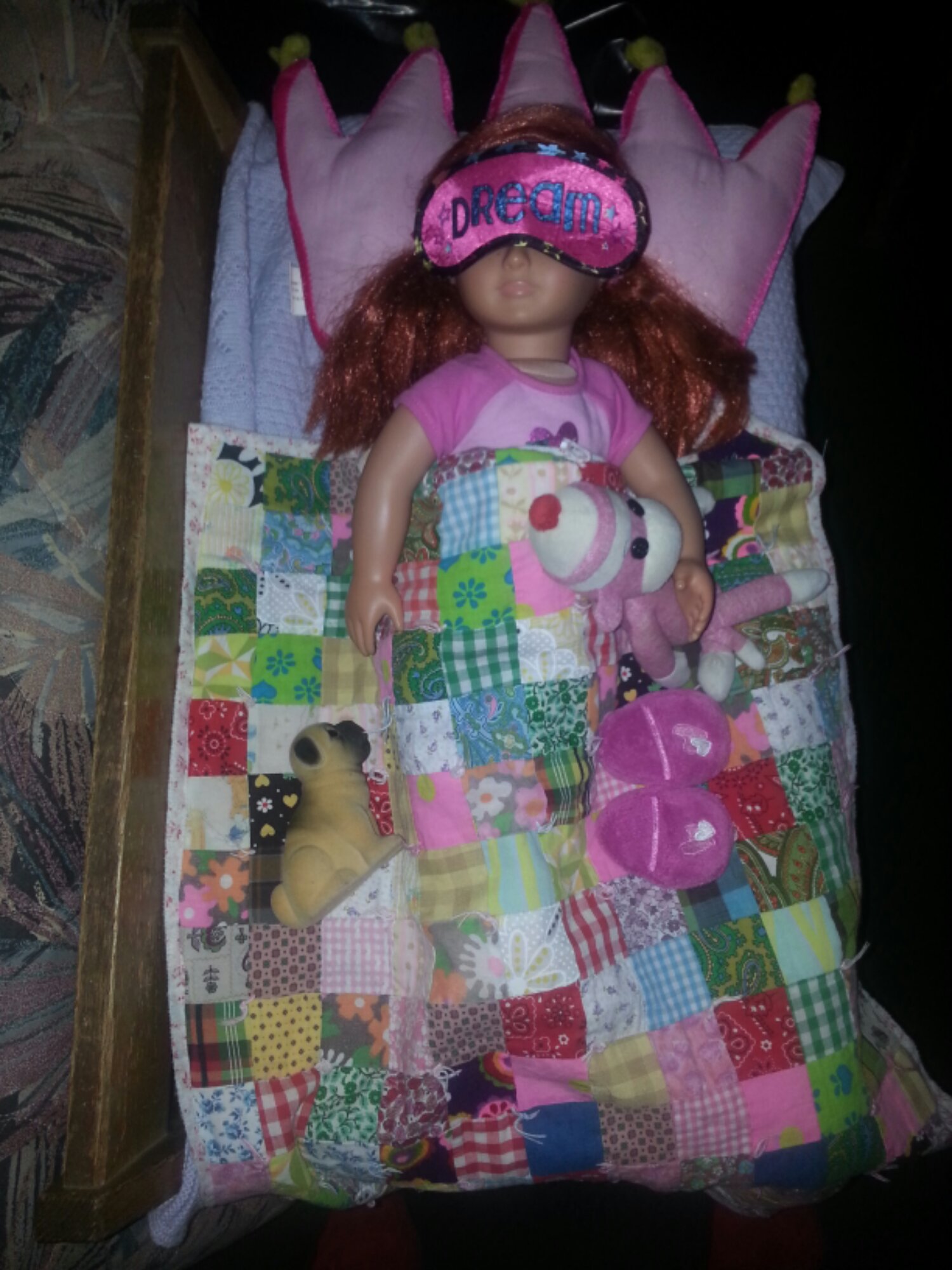 Is it possible to be jealous of a little red headed doll?

(Save travels this Christmas! We made it to our destination yeaterday afternoon after a slow slow slow start!!!!!)

When we put our family Christmas tree up we assume our specific tree trimming roles graciously. It amazes me every year. Boy, we are a trained bunch. Whose fault is that? Yeah, probably mine. My husband gets everything out of storage and assembles the tree. Bless him, he even fixes the lights when our tree’s lights get unruly.

Pre-Lit Christmas trees can have some of the most unruly lights. I’d throw the tree through the window, but not my husband. Cool as a cucumber, he’s over there deciding on his plan of attack. He’s the cool blonde type. I’m the temper flaring red head type. It’s obvious that this is the role for him. He’d prefer to handle the lights, as replacing windows isn’t his idea of fun.

With everyone sick over Thanksgiving Break, we had plenty of time on our hands for a slow tree decorating event. Why is everyone always sick during the holidays? Can’t a girl get a break?? Anyway, here’s how our Christmas tree turned out:

My role is to unpack all the ornaments, because I’m pretty obsessive about how they are to be unpacked. Original packaging is a must, so steady hands on deck only. Let me be honest, I take my job very serious. I look forward to the oohs’ and the awwwws’, as I reminisce over years past. I enjoy looking at how the kids have grown. My face reacts pleasingly as I reveal that the ornaments from my childhood survived another year:

Have I mentioned how much I enjoy card playing? I’m looking forward to a lot of that in a few weeks while visiting Nebraska and Kansas for the Christmas holiday. Our group favorite is Pitch, but if the three sisters have their way we talk Big Brother, or at least one other person, into playing Pinochle. It’s just the best card game ever. The Card Playing Bear ornament was given to me close to 18 years ago. It reminds me of my cut throat card playing family.

I even added part of a snowflake to the picture. Watching snow fall during our visit home this year would be great. Not sure who I turn that request in to… We don’t see snow in this part of Texas. By then, I know my family will be tired of seeing snowflakes, but we’ll expect them to humor our enthusiasm over the white fluffy stuff.

The two children in this family have the job of stringing beads and hanging ornaments. I’m so glad they’re getting better at placement. See how nicely they’re spacing them out this year: 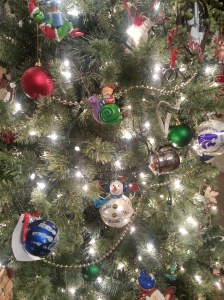 It sure beats the signature move of clumping ornaments on one single branch. All toddlers go this route at some point, although its super cute and picture worthy at the time. Now I’ll only have to go back and fix this tree’s treasures a little bit, or this will be the year I leave the trimmings as is. The verdict is still out.

What’s your opinion? Do you rearrange the placement of the ornaments or do you leave them alone? Every year I say I’m going to leave them, then my husband sees me sneaking in after everyone has gone to bed. I can’t help it.

This week I’m going to remember that we have hope:

As I type this, while looking at our tree, I may even have a glimmer of hope that I’ll leave the ornaments alone…hmmm. 🙂

(I don’t know how to work this camera. I don’t know why the bear photo is so much darker, it is closer, I’ll admit. Anyway, I’ll get better at photo sharing.)