(Parts 1-3 can be found here, if you’re willing catching up with us.)

I hadn’t used so many muscles in one day in an effort to stay alive in my whole life. Every single one of us had started this float trip with high hopes of laughter, fun and memories.

We were leaving with memories by this point, we could kiss the other two good-bye.

I have to tell you that our visit to the Frio River had been such a blessing, and truly every step had been fantastic. This destination was a life changing kind of opportunity. The kind of place to retreat to when you need time to think, but also time to just relax. Today the Frio was getting the best of me. Let’s be honest, it had the good, the bad and the ugly by this point. I may have hidden my emotions pretty well, but the silence I was putting out spoke a thousand words. I was nearly shaking with disgust over my weak behavior.

Mostly annoyed at myself, because had I turned around early on, I’d been back to the cabin hours ago. Relaxed and having appetizers; drinking something cool in my short chair. The chair I should have never left. I loved that chair and it never hurt me, or took advantage of me like the tube and this never deep enough river had, at least that’s how it felt.

We had entered our last rough patch. Oh for the love…

Everyone, but the sweet preschool aged child, was walking. We’d been out here about five hours and the sun was cooking what was left of our personalities. Most of us were wearing the wild eyes of someone who was holding in fireworks of the worst kind. I was aware that the tension was high. None of us were finding humor in our situation. It had been a long day.

We were coming up on some float worthy water so the kids had taken off again. As the water deepened even more, the adults followed. Watching what was ahead made me smile. It seemed as though we were coming up on another waterfall. This one much smaller. It was the kind of waterfall that barely qualified as a waterfall, but was big enough to give you that extra push to gain speed and ride the wind, so to speak. We were finally getting to Neal’s Crossing, Pick-up point #2.

That cute little waterfall that I watched the children go down failed the adults.

I watched each one of them pick up their tubes and walk down the rather narrow passage, which was located in the middle of the river. There was no easy walk around available, so chickening out was not an option. Great, okay fine, I’ll walk it too. What was new, right? Pay no attention to the fact that my feet were so sore, beat up, bruised and torn to shreds, I could do this again. I can ignore that fact that my legs are shaking like leaves, because they’d lost faith that they could carry me down the waterfall. They’d noticed that I’d lost my edge and that I was now doubting every step I took.

The waterfall was slick. Shocker, I know.

The shimmery stuff coming off those rocks wasn’t from the sun, no this was some kind of slime from another planet and I had no time to react. I went down, BAM! The inner tube I was carrying couldn’t even help. I’d lost my grip and it went on down without me. I rolled down the waterfall, if I had sound effects it would sound like an adult body rolling down river rocks and landing hard at the bottom. (I don’t have the ability to type out those noises.) Okay, so it was really one long roll, not numerous rolls, but I did fall and turn over once, maybe twice.

It was about that time I had decided to check out. Emotionally, I was cooked.

I remember looking facedown into the water just staring at the little shiny rocks and preparing to die. After a moment, I rolled over and looked up into the sky. I’d decided it was easier to stay here, in this spot and end it all. I’d seen a lot of birds today. I don’t know if they were grackles or crows, hawks or vultures, but they were here and I had a feeling they were hungry. I was big enough they’d eat on me a while. I’d keep that circle of life moving. There was no way I was coming back from this fall. I was tired, broken down, and beaten.

I lay here in the Frio face up and in “starfish form”, my eyes towards the sky, deciding whether or not it would just be easier to die. You see, I heard them coming and there wasn’t a thing I could do. Not an ounce of fight left in my body. I began reflecting on where it all started going wrong once the youth group, made up of Christian teenagers, started tubing straight over the top of me…

We’d seen them on and off along the way, they’d stop off and played somewhere to only have to pass us again. I recognized their youth leader’s voice, he was sweet. Maybe he’d do my memorial service. That would be convenient. I turned my head and saw their tubes coming. I remember yelling something like…”Just go over me…”, “It’s fine, I’m okay.”, and so they did. About a half-dozen of them ended up floating over my body or legs as I laid there the defeated daughter, mother of two, wife, sister to three, and friend. I’d agreed to float with them and this is what was left of me.

I couldn’t believe the group had floated over the top of me either, but I sensed that they understood where I was mentally at this point.

They didn’t want to poke the bear.

After they passed, I’d had time to realize that laying there and dying would take a lot of time. It could possibly be more painful than finishing this trip out. I’d decided that the kids didn’t deserve to see their mother end in such a way, so I sat up. I was silent because I knew I 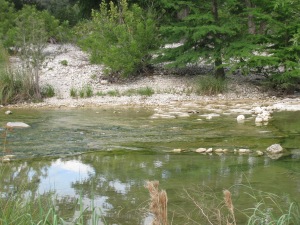 had to dig in pretty deep to find that ounce of “care” I had left.

I was going to burn these river shoes when I got back to Houston. I wasn’t going to ever leave the city limits again. This country girl had seen enough challenge. The adults were all standing together when I’d finally stood up again. They had this look of defeat as well, but none of them were quite the princess I was proving to be. I couldn’t disagree.

We finished strong and even floated in to the big pond at the end at Neal’s Crossing.

It was there that one of the teens had discovered they’d lost their iPhone. The one with the waterproof case which contained all the underwater videos of little fish, cute water shoes dancing amongst the fishes or whatever else a 13-year-old needed to video, but the fact was it was gone and so were the memories of her last four days.

It was then that Amy, the teen and my husband all turned around and headed back up the river in search of an iPhone that was 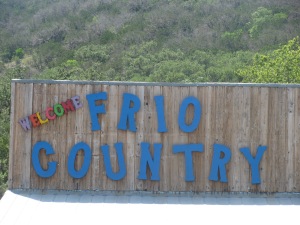 Good luck with that. I’ll be over that way, applying for my toe tag.

In the end, we’d finished, even if part of our group had to turn around to look for a phone which had been found about 45 minutes later, thankfully.

So it hadn’t been the day I was expecting. My agenda went straight out the door. I had wanted to continue to enjoy the company of the people around me . We were going to laugh. I was looking forward to daydreaming during those quiet moments that I tend to live for.

Today I had been taught to try something I’d done before, but in a different way. I was asked to get up over and over again. I was pushed down, as if God Himself was telling me “No, you came, it’ll be done my way.”

I was shown how to find the joy in smaller quantities and in impossible situations. I was learning to keep my mouth shut and be thankful for the experience I had been given.

He’d even sent a group of smiling Christians, just to show me it could be done. You can float the Frio River and live to smile about it.

I was reminded that my day dreaming was actually not welcome on the float trip. The plan had been hard work from the get go. I had to learn to trust myself, push myself and to lean into a higher power.

He had set up a meeting, yes, He wanted that kind of meeting….with me. During that float down the Frio River I’d proven I could get back up. I’d learned I was much tougher than I thought. Mostly, I understood that there would be a reward at the end of every learning curve, however it may not look the way it was envisioned. I had become reacquainted to the idea of taking it slow, respecting the process and to be thankful for the journey.

(An Epic Journey, to be continued and concluded…)

“Fate never promises to tell you everything up front. You aren't always shown the path in life you're supposed to take. But if there was one thing she'd learned in the past few weeks, it was that sometimes, when you're really lucky, you meet someone with a map.” ― Sarah Addison Allen
Loading Comments...
%d bloggers like this: